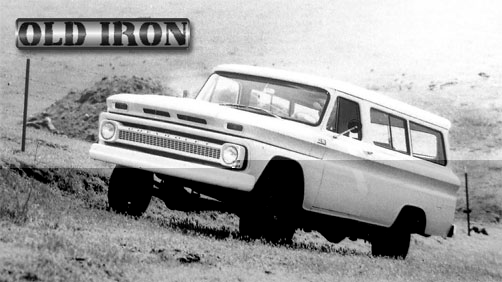 A Carryall was often a rancher’s best friend. With all but the front seat removed, it provided covered storage for tools and equipment. Maybe even a good place to roll out a sleeping bag. With all seats installed, ranch hands had all-weather, all-terrain transport.

FORGOTTEN MAY BE TOO HARSH A WORD, but you certainly don’t see many ’60-66 Chevy and GMC Carryalls around today. Their chiseled looks, combined with a “highboy” stance, make them sharp looking old iron. In 1960, Chevy and GMC 4x4s had moved onto a new track. No longer were their four-wheel drive components sourced as kits from NAPCO(Northwestern Auto Parts Company) and installed on a special GM assembly line.(NAPCO had been doing four-wheel drive conversions since the early ’50s, specializing in GM trucks.) By 1960, the four-wheel drive market had expanded past the point of being a low volume sideline. It had become big business and General Motors began sourcing the components independently.

Even bigger news was the restyling done to the GM truck line in ’60. Gone were the rounded corners of the ’50s, replaced by the crisp, fresh lines of the hip ’60s. Both Chevrolet and GMC shared the same bodies but remained separate lines in many other ways, most notably powerplants, but also in the options area.

The ’60s brought innovations beyond looks. Most of them came on the 4x2 trucks, such as the industry-first independent front truck suspension. In the 4x4 department, GM opted to use the more modern Dana 44 axle as opposed to the Napco-modified GM H-033. GM retained use of the Timken T-221 divorced transfer case, which NAPCO had also used. 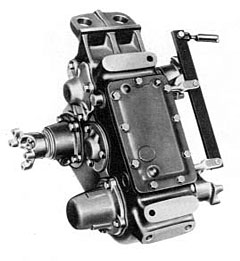 You don’t see this t-case often these days. The Timken T-221 was a three shaft case from the 1950s to 1970 in GMCs. It had a good record for reliability, but because it was not a direct-drive unit, it tended to be noisy and run hot. It was a complicated unit with lots of bearings and was based on a Timken design used in 6x6 trucks. Parts are expensive these days.

The ’60-66 Carryalls came on a 115 inch wheelbase and were equipped with seating for six in a 3-3 configuration. If you ordered the optional third seat, you could seat eight in 3-2-3 configuration. Luxury did not abound in this era. These were the days where you had to pay extra to get a heater and an interior light. The Custom Comfort Option (RPO Z62) lessened the blow a little with foam-padded seats, special insulation, a cigarette lighter, passenger side armrest and sun visor. Tinted glass was optional separately, as was an improved recirculating heater. Power steering? Uh-unh. Power brakes? Better start exercising. Air conditioning? No way... unless you count the old “2-60” type. 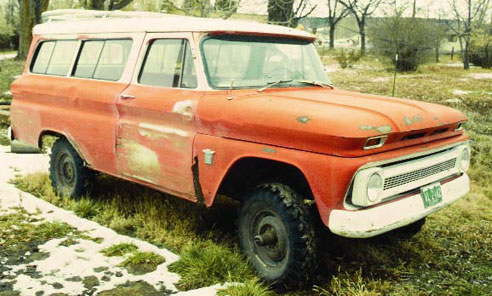 A ’64 Chevy Carryall still at work but showing the ravages of the years. It’s resplendent in the faded remains of its red/white two-tone paint job. (option number 544) This one was also decked out with a V8, radio, roof rack and 4-speed.

The dealer had a number of GM approved add-on goodies available to help in the comfort and convenience department. These included an add-on Cool Pack air conditioning system, AM radio, deluxe rear view mirrors, windshield washers and even a Hydrovac power brake system.

With a Chevrolet, you had the choice of two sixes or the 283 V8. With GMCs, you had the 305ci V6, period. This was the era in which Chevrolet switched from heavily promoting sixes for trucks to pushing the V8s. Until ’60, you couldn’t even get a V8 in a 4x4 Chevy. Even early in the ’60s era, the number of sixes produced was four times the number of V8s. That began changing as the decade rolled on.

For ’63, Chevy went to a new line of sixes and the venerable four-main bearing 235ci, and it’s big brother, the 261ci, were retired by the 230 and 292ci seven-main bearing engines. These all-new sixes incorporated many V8 internal parts. With a few minor variations, the optional 283ci 2-barrel V8 remained unchanged in this era.

GMC dared to be different by introducing an industrial-strength, 60-degree V6 in 1960. It replaced both the 336ci V8 (sourced from Pontiac) and the venerable GMC 270ci inline six. The 305 Jimmy was the first American-built V6 engine, though unlike V6s of later years, this 800 pound monster outweighed most V8s. Power output was modest. The standard engine started at 125 net hp, but an optional, higher power 142hp version was offered in the early years. Later it was made standard. This engine also saw use in big Jimmies and was built in 351, 379, 401, 432, and 478ci displacements. A Twin-Six version was built by combining two V6 blocks into one casting to make a V12. The 351ci version was converted to make the infamous Toro-Flow diesel, a few of which reportedly found their way into GMCs of the period.

Beyond changing paint options and the obligatory annual grill change, the ’60-66 truck didn’t see many cosmetic changes. The only major one was the hood. The ’60 and ’61 trucks had the very jetlike intakes on the hood. For ’62 and beyond the leading edge of the hood was reshaped and the turn signal/marker lights relocated.

There were no automatics available and a 3-speed Saginaw SM-318 “three-on- the-tree” was standard, with the legendary Saginaw SM-420 4-speed optional. There have been reports of some Powerglide equipped automatics in the 4x4s, but they are not shown in the factory Data Books. The divorced Timken T-221 (a.k.a. the Rockwell T-221) t-case was good and stout, though it was equipped with a marginal 1.94:1 low range.

Left: The ’60-66 trucks were almost the last gasp for divorced transfer cases from GM. The divorced layout made for an easy 4X4 conversion of existing 4x2 chassis in the days before IFS. It necessitated a higher stance for front driveshaft clearance. This is a ’62 or early ’63 truck, which had the new style hood but still ran the old style H-033 dropout rear axle.

Right: Comfortable seating for eight... sorta... by ’60s truck standards anyway. The K1406 model came standard with a full-width rear seat. When you ordered the third seat, the full seat moved aft and a short seat went in the middle. The 13 inch narrower center seat was necessary for access to the back.

Rear axles vary somewhat over the years, while the closed knuckle, Dana 44-5Fs handled the duties up front. In the rear the venerable H-033 dropout was used into ’63 for the rear of halftons. It had a big 9.375-inch ring gear with 17-spline c-clip axles. From mid ’63 on the integral housing, 12-bolt 8.8- inch truck axle took over, initially with 17 splines and later with 30.These General Motors trucks are the bridge between the old days of discomfort and privation where 4x4 vehicles were used primarily for commercial purposes to the days when comfort and convenience became important to a more recreationminded customer. The Sport Utility era began when the Carryalls morphed into all-wheel drive station wagons. One interesting final fact is that the familiar name, Suburban, was seldom seen in reference to these trucks. 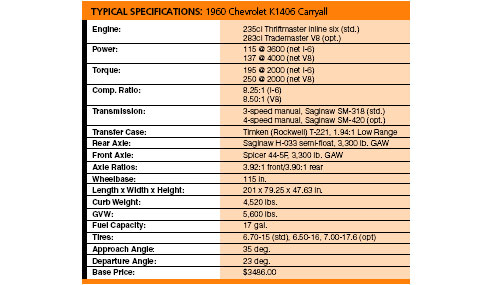 from www.oramagazine.com used with permission